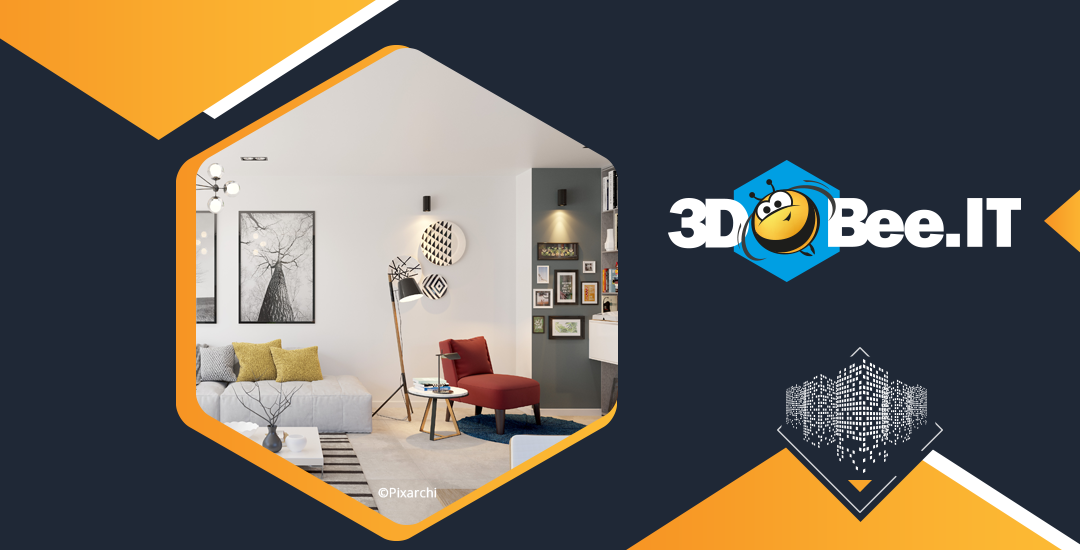 Keeping up with the CG industry requires keeping your eye on many happenings, from technology to popular entertainment, but some of the less central aspects of the world of 3d design can easily fall through the cracks, especially if your focus is on modelling lifeforms. Unless your creation exists entirely in the wild, you’re going to need to design an interior for it to inhabit, and an interior design styles list is always a good place to start! To aid you in your quest to design a fantastic interior we have taken the time to research and narrow down some of the most popular interior design styles of our time.

Originating from around the 1920s, minimalist interiors took inspiration from multiple sources, including the now-Microsoft Paint reminiscent De Stijl art movement (1917–31), architecture by Ludwig Mies van der Rohe, and the simplicity of traditional Japanese design; a design style that for better or for worse has continued to pop up ever since. Taking a “less is more” approach, it focuses on functionality and very clean lines. An abundance of boxy shapes would make 3d modelling this style pretty straightforward. UV Mapping would be a breeze, and the use of plain neutral colours almost turns Texturing into a Paint Bucket exercise. However, with the right use of lighting the overall aesthetic can be much improved. A (in)famous example of minimalism is the former Bel Air mansion of Kim Kardashian and Kanye West, in which Mr West might have believed he was a fresh heir to some throne somewhere.

This style first arose during the 1930s in the Nordic countries, pulling from the natural beauty of the surrounding fjords, snow, and mountains. Named after 1954–57’s influential design show which toured the US and Canada, the Scandinavian style is characterised by functionality, simplicity and clean lines. In stark contrast to the sharp angles and plain textures of its predecessor, this style showcases a variety of textures and oftentimes almost sculptural fluid lines that turn the furniture into a work of art. Scandinavian design holds a benevolent and inspiring philosophy beyond just being cosy and aesthetically pleasing; its main purpose is to improve daily life via the promotion of high quality eco-friendly sustainable products easily accessible and affordable to people from all walks of life. It achieves this goal with natural materials such as wood, aluminium and steel, as well as a mindful use of plastic. Its colour palette is built upon a foundation of white and grey tones. A famous example of Scandinavian design is the Ovalia Egg Chair, which was first exhibited at the Scandinavian Furniture Fair in 1968.

In the 1950s and ‘60s, the USA was looking to reinvent itself. Heavily inspired by Scandinavian design, and via the creative use of new materials such as plywood within industrial design, the US was able to shatter long-established trends and swiftly modernise its design industries. And so a style was born that has withstood the test of time and remains a ubiquitous addition to many an interior to this day. Coined in the mid-’80s, “mid-century modern” encompasses some of the most iconic pieces in modern interior design. With its clean lines, organic simplified forms and focus on functionality, mid-century modern perfectly blends aspects of minimalism with contemporary design. Dazzling hues of blues, greens and rusty browns are the order of the day with this ever-appealing style, making it fit well within vibrant and eclectic designs, such as those created by professional interior designer, Chris Billinghurst. A great thing about mid-century modern is its versatility. It easily compliments a variety of design styles while still providing a distinct look, thus making it an excellent addition to any interior design project, as well as a great choice in one’s search for quality 3d assets.

One of the broadest design terms, “Modern” encompasses a number of style variations. It shares some traits with contemporary interior design so can be easily confused. This style presents a tendency for open floor plans and monochrome palettes such as black and white, with careful use of primary colours like blue, red and yellow in order to provide striking colour contrasts. The word “sleek” is often used to describe this style, referring to its use of elegant, smooth shapes and glossy materials such as metal, glass and steel. A characteristic of this style is a lack of clutter, however, this does not mean it shies away from adornments such as framed art or photographs on the walls. These interiors are usually complemented by an area rug sporting either a single colour or geometric patterns.

As described by Homedit, contemporary design refers to what is being produced here and now and forever remains in a constant state of flux, whereas Modern is an era-specific style, with some saying it refers to the 1920s-50s and others stating Modern refers to 20th-century interior design as a whole. In contrast, contemporary design does not adhere to any single era nor style, it has no qualms about cherry picking appealing elements from the past and turning them into something new. It can be found sharing a similarity with Minimalism by way of its penchant for straight lines, yet unlike Minimalism it does not shy away from texture. Expect glass, steel, wood and either large or numerous windows providing a lot of natural light; basically, a clumsy introvert’s hell. The design of artificial lighting has become an artistic statement, so you’ll have a hard time finding a regular light bulb in this kind of interior. Like Modern, this style currently shows a bias towards open floor plans and area rugs. No one knows for certain where this style is headed next, and that’s exactly what makes it fresh and exciting.

Within interior design you’ll usually find the terms beach, coastal and nautical referring to the same thing. Like the Scandinavian style, it pulls design inspiration from its surroundings, but does so far less subtly and does not shy away from accessories. Coastal interiors provide their inhabitants with a relaxing beach-inspired environment that makes you feel close to the ocean; in other words, an unfortunate environment for anyone terrified of drowning (reasonable), sharks (unreasonable), or the Kraken (?). Either light or dark wooden floors, wicker chairs and linen or rattan upholstery are a staple of this design style, with a colour palette built upon a white or sandy backdrop complimented by oceanic blues, greens and sandy yellows. With the various accoutrements pulling inspiration—or pulled directly from—the sea, viewing this type of interior becomes a game of I Spy where the mystery object is usually a seashell, or sometimes even a swordfish.

Ahh, Bohemian; a minimalist interior designer’s worst nightmare, as this style looks messy on purpose. Bohemian has come to describe an artistic person who’s socially unconventional, with a familiar example being members of the 60’s hippie movement. Reflecting an adventurous and carefree spirit you may find furniture and light fixtures from a variety of eras, plus items of various origins picked up during the inhabitant’s travels. No two Bohemian interiors are exactly the same, but there are a few common features most share. This may be the most consistently cosy of all the interior design styles, characterised by comfortable seating areas, globally inspired rugs, tapestries, collection displays and maybe a floor pillow or ten. Vibrant colours and rich patterns are the order of the day in this interior, often giving off nomadic and ethnic vibes, inspired by the likes Mexican, Morrocan and tribal design – actual tribal, not Westernised “tribal”. As to materials you’ll often find animal hide, metal accent pieces, as well as lots of textiles (and we mean lots).

With this appreciation for interior design ideas and style origins, you can go forth with newfound knowledge of what clients may be looking for to up your 3d design game even further. If the idea of modelling some of these furniture designs seems a little too daunting, whether it be to lack of time or experience, there is always the option to download high-quality photorealistic 3d assets, such as those found on our pride and joy, 3DBee.IT.