Planning for Success: How to estimate and manage time when working on your archviz project? 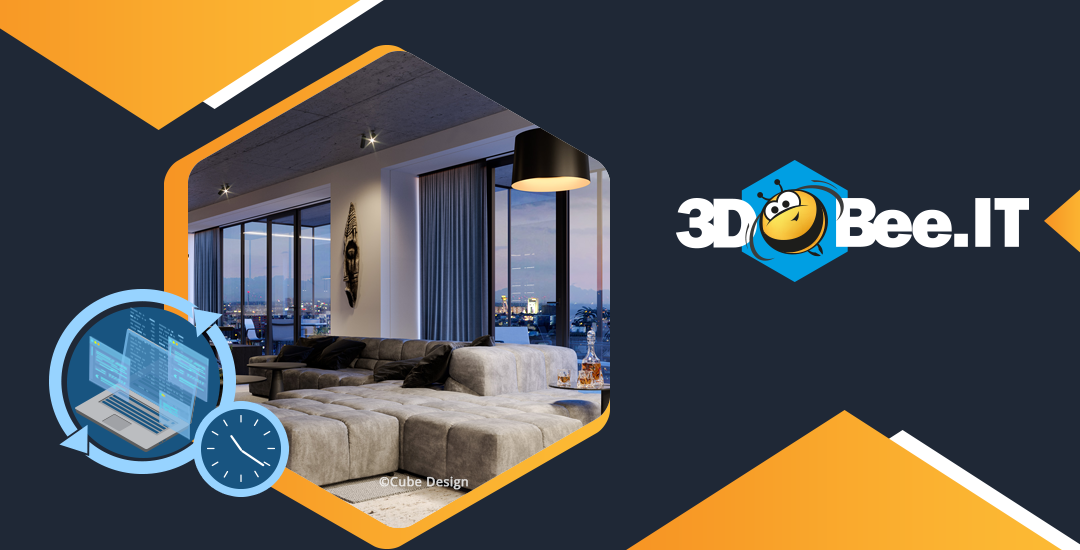 A 3d project can mean anything from a simple still shot, to an animated sequence, and is seldom a straightforward task. As a freelance 3d generalist, you often need to take on many roles notwithstanding actually being your own manager. It can be overwhelming at times, but as with any complex problem, the solution lies in tackling things one piece at a time, instead of its entirety. Here’s how you can manage your 3d jobs without feeling like you’re up against insurmountable odds.

Before firing up your 3d suite weapon of choice, it’s good to think of what you’re expected to deliver, the work that it entails, how long you have to work on it, and why you’ve been selected to do it in the first place.

Let’s use a common scenario to elaborate on this.

You’re tasked with creating an interior render. You’ve been given a blueprint for the room, as well as some references for a style the client would like for the visualization, and two weeks to produce three distinct shots. With a brief like this you could break it down as follows:

DELIVERABLES: three shots of a furnished interior scene, modeled to scale.
DEADLINE: two weeks
YOUR ADDED VALUE: Photorealism. You think the client chose you because of your keen attention to detail.

Now it’s time to start breaking the project down into objectives you need to reach to produce the final work, and figure out what sub tasks each objective entails:

At this point you should have a clear idea of how much of your time each task would take, and plan your working hours accordingly. Some of the tasks are iterative, some tasks may require more time because they are less linear than the others. Let’s go through the list again:

Now everything is on the table, and all that’s left before actually rolling up your sleeves is to consider what it is you can deliver to your client that will really impress him or her. Working with this scenario, you really shine in making your renders look like they already exist in the real world. This means the more of your time you can spend on perfecting your materials and textures, and lighting the scene to really make those details pop, the better!

Let’s go through the list one last time and see where you might speed up some stages so that you can allocate even more time to achieving your trademark photorealistic renders!

Creating and furnishing the room

Your modeling skills, though great, can take the backseat where possible, because having to get the geometry down and then unwrap, texture and shade every piece of furniture in the room would not only be tedious, but also eat a lot of your time. A practical solution would be to find a 3d asset provider that suits your needs, and provide some automation for material creation so you don’t spend time plugging textures to your shaders.

By using an asset service you get models that are made by professionals, and can rest easy knowing the meshes will be clean and have proper UV maps and textures. You also have the possibility of auditioning different pieces for your client, which should land you some bonus points! While assets need to be purchased, it’s always a good investment to build up your own library of models you can use in future projects too!

Let’s say you’ve spent the 6h you anticipated for building the room from the blueprint, but have now reduced what would have been 20h to create the furniture assets thanks to an asset service. That’s 20h extra to spend later on!

What makes a good layout isn’t always quantifiable, but you can eliminate some of the guesswork and iteration by simply borrowing ideas from interior photography and design. It can help to add a proxy human figure to your scene to get a sense of the logistics of the room, such as walking space, and work from there. Working with pantone guides can also speed things up, since you can arrange your furniture by how well their colors work together.

Here’s where the time you saved using an asset service really pays off. Once you’ve established how the natural and built light sources interact with the space, and checked exposure and white balance, you can focus on really making your textures pop. Add some realism to your renders by first identifying which assets would be the point of focus and are closer to the camera. Then, see what areas of these models might be good to highlight. A light source might be shining directly on a tabletop, which could be an invitation to give the surface some detail maps such as dust, to help make the room feel less sterile. Maybe a coffee mug happens to be in front of the camera in one of your shots. Subtle fingerprints or even a lipstick stain on the rim of the mug might lend some character to the scene.

With more time on your hands, you can now be as meticulous as you like, creating extra maps or adjusting shader values to your heart’s content! Outlining some interesting shapes with a backlight isn’t out of the question either, especially for a 3d artist (wink).

If you haven’t spent all those additional 20h on refining your scene (I mean, come on!), this is another stage they could come in handy. Lower samples and a denoiser often can do the trick for render previews, and in some cases, taking advantage of real time rendering might also be viable, but thanks to your planning ahead, you can cut less corners in your initial renders. Many render farms provide a sizeable amount of render credits for new users. You can render all your shots simultaneously, with generous render settings, and get an estimate of what it’s going to cost you to render the final shots, for free! If you anticipate many turnarounds, it might be worth reducing the output size of your frames to a fraction of the final size, and using the render times to calculate the final cost later.

Compositing know-how can be a lifesaver in terms of creating variations in color, mood and even in mixing and matching elements in your shot (within reason). Cryptomattes, render layers, render passes and shadow-catchers are some very important compositing tools that can prevent you from having to re-render the whole scene for every minor change.

We’re in the endgame now, and things are looking sweet as pie. Though you should make some last considerations before you launch your render jobs. The results of your initial renders would have let you know whether your files were uploaded to the server properly, and if there were any bad frames. If there were any issues, it’s important to get in contact with your render farm’s support team so that they can either monitor your jobs with extra care, point you in the right direction to fixing issues, or fix them for you, if the issues were caused by the infrastructure in any way. Keep the communication lines open, and do what you can on your end to avoid issues in the first place.

A good rule of thumb is not to have your assets scattered across different directories, especially if they’re in different network drives, for example. While some render farms provide some pretty sophisticated scene preparation plugins, it’s always better to be safe than sorry. It’s also a good idea to launch a render of a particular shot as soon as your client gives the go, instead of waiting for all of them to be approved. That way, some shots will finish earlier than others and allow you to begin your final color grading and post adjustments right away.

And that is how you might tackle a big archviz project from start to finish! The key takeaways are:

1. Break down your tasks according to your pipeline
2. Get an estimate of the time it would take for each task
3. Find ways to shorten each task without sacrificing quality in the end result
4. Anticipate your client intervening
5. Take advantage of third party services and tools
6. Create more time for yourself in areas of production where you excel

We hope you enjoyed this article, and if it was of any use to you let us know. Happy creating!